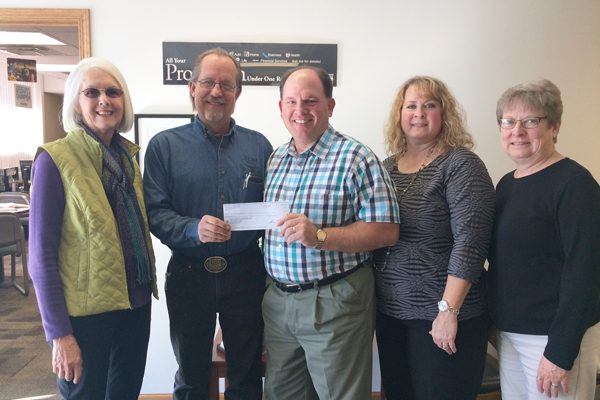 In celebration of its 90th anniversary, Amer­i­can Family Insurance, founded on Oct. 3, 1927, asked its customers, agents and employees to nominate local nonprofits to receive a $3,000 donation.

A couple of months earlier, Hanschu had responded to an email about it, she said.

“That email just happened to pop up, and he filled out the application,” Fleming said. “Jayson was familiar with HCF as a board member.”

When announcements were being made, Hanschu contacted Fleming and said HCF was awarded a $3,000 donation.

“I expected to get a message thanking me for the application and that the funds had gone elsewhere,” Hanschu said about the email.

Fleming said when Hanschu opened the email, though, the company stated his agency’s nomination of HCF would be a recipients.

Some 90 charities across the country received $3,000 from a total of 17,000 nominations vying for the “Community of Dreamers” gifts honoring the company’s 90th birthday.

“We are so appreciative of Jayson (and others) for this donation,” Fleming said.

The Hillsboro Community Foundation promotes and facilitates charitable giving, supporting projects and programs that enhance the quality of life in Hillsboro, she said.

In fulfilling that mission, the foundation plays many roles to include:

• receiving and managing donor funds for projects benefiting the Hills­boro community and nearby areas.

• serving as an ambassador by promoting the needs of the Hillsboro community.

An American Family Insurance spokesman said a total of $270,000 was distributed as a way for them to give back to the communities.

“Strengthening individuals and families so they’re better able to pursue their dreams makes our communities stronger and American Family can be proud to be part of that,” said Judd Schemmel, community investments director.

For more information about HCF, call 620-947-0170 or email: director@hcfoundationks.org.